How to Keep Coronavirus Worries from Disrupting Your Sleep

A sleep expert weighs in on how to get a better night’s rest during this time of heightened stress. Featuring:  Shelby Harris, Psy.D., C.BSM  - Director of the Behavioral Sleep Medicine Program at the Sleep-Wake Disorders Center at Montefiore Medical Center and Assistant Professor of Neurology, and Psychiatry at the Albert Einstein College of Medicine.

Many people I know have been complaining lately about losing sleep. It’s no surprise why. All of us are feeling increased stress and worry, and experiencing changes in our work and family life. The novel coronavirus can keep us up at night.

What can we do to protect our sleep during this time? For answers, I turned to Shelby Harris, the former director of the Behavioral Sleep Medicine Program at Montefiore Medical Center, an associate professor at the Albert Einstein College of Medicine, and author of the book The Women’s Guide to Overcoming Insomnia. We discussed what’s driving sleep disruption, the place of news and social media in our lives, the best way to binge your favorite TV shows, and more.

Jill Suttie (JS): Why do you think it’s important to consider our sleep during a time like this, when so much else is going on? 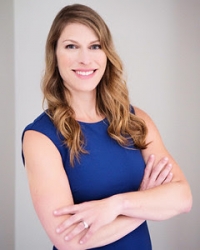 Also, it’s important for our relationships. People who are sleep-deprived tend to be more irritable with their family and more irritable at work. We’re already stressed to begin with, but without enough sleep, people will lash out a lot easier and a lot quicker at others around them. Our irritability goes from zero to 60 a lot faster when we are sleep-deprived.

JS: People seem particularly anxious right now. Is this playing a role in sleep disruption? Are other things contributing?

SH: People are definitely worried right now. They’re worried about their families, about money, about what’s going on in the world. And even people who aren’t typically anxious are now saying that their brains are so busy that they can’t turn them off to go to sleep. Or they wake up two hours later and their brain is just right there thinking about news and about life, and they just can’t quiet it down.

But there are also people who know that their families are fine, and while they’re concerned about the world, they’re not overly worried. What gets them off track with sleep is the lack of a schedule, the lack of routine in their lives. They’re not in their same beds, or they’re not going to sleep and waking up at the same time. Maybe they’re watching the news and getting bright-light exposure at night, or they’re not exercising the same way they used to, or they’re not socializing during the day. When their routine is taken away from them, that’s when people get thrown off their sleep.

JS: How does not socializing affect our sleep?

SH: When I think of socializing, I think it’s like charging your battery. It’s not about just talking to people over Zoom, but about people having a lunch date or working out with a partner and going out for a walk together. These are all ways to help bolster your mood by socializing, but they also mean you’re getting light exposure, which charges your battery.

If we’re not doing those things—if we’re not connecting with people and we’re not going out of the house—it’s just going to make it harder for us to sleep at night. Plus, if people feel more isolated, that can negatively impact their mood, too.

JS: You mention watching the news as a problem, but we need to stay informed.

SH: I’m a huge fan of limiting your news intake, and I think everyone needs to stop checking the news at night, when nothing is changing. People should try to check news no more than once a day, if that. And people need to be very thoughtful about what they’re checking and why they’re checking it. Here in New York, I’m having people just watch Governor Cuomo’s conference briefing every day, because it’s really the least triggering source of news for people.

JS: Do you think that positive or inspiring news could be useful now?

SH: It can be, but staying away from all news at night is a good idea. Not that you should live in avoidance—that’s not good either. But, at night, you just need to find a way to wind down. Maybe you could add some positive news into your hour or half hour of news during the day. But at nighttime, that’s when you should practice gratitude, practice meditation, practice the stuff that’s more personal to yourself.

JS: I’m hearing people complain about three different sleep problems: not being able to fall asleep, waking up in the night feeling panicky, and waking up too early without a full night’s sleep. Do you see those as separate problems requiring different interventions? Or are they all the same problem?

SH: I can’t really say, because people’s sleep problems are so varied. Sometimes depression can cause early-morning awakening, but so can anxiety. Then again, a busy brain can be the cause of us having trouble falling asleep. A lot of women who’re going through perimenopause and hormonal issues can wake up in the middle of the night, or so can people with sleep apnea or diabetes. So, it’s hard to make blanket statements—there are so many different factors that can cause these things.

I’m encouraging people to use meditation a lot during the day, because that helps with all of these sleep issues—at the beginning of the night, the middle of the night, and the early-morning awakenings.

Also, some people may tell you that if you didn’t sleep at night, you should take a nap during the day to compensate for the loss of sleep at night, or to sleep in late in the morning, or to go to bed earlier than usual. But that’s all stuff that’s actually going to make it worse. So, I recommend people keep a stricter sleep schedule when they’re not sleeping well.

A lot of these recommendations help across the board, but what I might change is the timing of going to bed—for some people. I might have some people stay up later to push their wake time later; but that’s very individual and varies based upon their sleep schedule and how severe the problem is. It depends if someone’s waking up super early—like two in the morning every night.

JS: A lot of my friends have been sharing great TV shows and movies to stream or watch at the end of their workday. Is watching these a problem for sleep?

SH: It’s fine and not fine. People will binge-watch in a good way—maybe to get out of their reality. But then they lose track of what time it is and, before they know it, it’s an hour or two or three later than when they should be going to bed. So, what I usually recommend people do is to watch one show and then turn off the auto function on Netflix (or whatever service it is) so that when the show ends, you make a mental note of looking at the time. If it’s close to your bedtime, you turn off the show. People need to stay away from screens at least the half hour to an hour before bedtime, because that bright light really does delay sleep.

JS: What about the content of the show? Does that make any difference?

SH: Light actually has a bigger influence than content. That’s why they make a huge deal in the sleep field about blue-light exposure before bed and during the night. But yeah, of course what you watch is going to make a difference, too.

That being said, I’ve worked with a lot of millennials over the years who were watching The Office and Friends—I don’t know why those two shows, but they love those two shows—and they will not change to become a reader. So, what I have them do is use blue-light-blocking glasses that you can get online to watch TV. That’s worked for them, because those shows are calming and funny and the glasses block most of the blue light.

I haven’t seen content make a big difference. As long as it takes you out of stress, it’s fine. But I am a big fan of just old-school methods for calming your mind before bed. Find a book, find a magazine or a puzzle if you can. Up until an hour before bed, you can watch all the TV you want. But, from a sleep preservation standpoint, you don’t want blue light right before bed, because it reduces your natural melatonin. Melatonin is the hormone usually released in your brain when the sun goes down and makes you sleepy. Interfering with its release is a terrible idea.

JS: Is there anything else that you think we need to know to sleep better?

SH: Some people need to stay away from social media as much as possible. I want people to connect, but some social media feeds tend to be triggering for people.

Having a routine is key, because if you don’t have routine during the day, you’re not going to have any routine at night. Too many people are working into the late-night hours, because they can’t keep ahead of everything. They need to try to set a cutoff time—a strict bedtime and wake time—and to really end their day so that they reduce white-light exposure at night.

Also, make sure when you’re working during the day that you have bright light. Open your shades, even if it’s cloudy out—especially when you first wake up in the morning. Then, an hour or two before bed, start dimming the light, to say to your brain that it’s bedtime now. You should get into a rhythm where it’s light during the day and dark at night, to help set your nighttime circadian rhythm. That will help you sleep, too.