Teens Are in Crisis. So Are Their Parents.

As hard as it is to be a teen today, it’s draining being Advancedthe parent of one.

The pandemic turned Tiffany Lee’s home into a battlefield.

Wary of illness, Ms. Lee started taking precautions back in March 2020. She asked her 15-year-old son, Bowen Deal, known as Bo, to practice social distancing. She insisted he wear masks. But that didn’t sit well with him, because many people in their rural town didn’t follow such rules, she said.

“He would see all of his classmates having pool parties and going bowling and he’s angry at me because I won’t let him go,” she said of Bo, a freshman in high school in Metter, Ga., outside of Savannah. “He thinks I’m the bad parent because Mom is standing between me and my friends.”

Normally, the teenage years are when children separate from their parents, but today’s teens have been spending more time at home than ever. Adolescents who yearn to rove in packs found themselves confined to their bedrooms, chatting with the pixelated images on their screens.

“The group that is suffering the most” in terms of isolation “is 13- to 24-year-olds,” said Dr. Harold S. Koplewicz, president and medical director of the Child Mind Institute in New York City. “They are losing out on being allowed to separate. They’re having trouble with their academic goals. Many of the things they have been working for are gone.”

But as hard as it is to be a teen today, it’s draining being the parent of one. A national poll of parents of teens, released in March by C.S. Mott Children’s Hospital, found parents toggling between different tactics, trying to keep their children’s mental health afloat. About half of those surveyed said their teen’s mental health had changed or worsened in the pandemic. In response, half of these parents tried relaxing family Covid-19 rules, or social media rules. One-third spoke to a teacher or school counselor about their child; nearly 30 percent reported seeking formal mental health help.

“There’s been no prep for this,” said Julie Lythcott-Haims, the former dean of freshmen at Stanford University and the author of “How to Raise an Adult: Break Free of the Overparenting Trap and Prepare Your Kid For Adulthood.”

“Most of us haven’t had anything remotely resembling practice” with a pandemic, she said, “so we’ve had to flail, while simultaneously performing the part of a parent who kids can rely on for emotional support.”

The availability of effective vaccines, while welcome, introduces new uncertainties, she said. Will normal return? When will it come? What even is normal now?

For Ms. Lee, 43, conflict with her son came to a head in January. Ms. Lee had just spent a holiday season dodging profanities flung at her by customers who didn’t want to wear masks in her clothing boutique. Meanwhile, Bo demanded that he be allowed to return to school in person.

I was at my wits’ end, and I couldn’t fight him anymore,” she said. She said she told him that if he got Covid-19 and brought it home to the family, “this is on you. You understand this, right?”

A certain level of autonomy is important to teens, but in the pandemic they’ve had very little, said Jennifer Kolari, author of “Connected Parenting: How to Raise a Great Kid” and a San Diego-based therapist and parenting coach who leads workshops on parenting. For some, during the pandemic, their own messy bedrooms may be the only place they feel they have control, she said.

She suggests making an appointment with your teen, for later in the day or during the week, to discuss whatever issue keeps drawing the two of you into a fight.

“You can say, ‘Later tonight, we’re going to have a sit-down, and I want to hear your plan,’” she said. “‘I trust that you have a plan, and if you could let me in on that plan, that would really help.’”

Amid racial tension and hate crimes, including the wave of anti-Asian violence this spring, many parents of color have tried to help their children process racism and civic unrest.

Thea Monyeé, a therapist in Los Angeles, watched her three Black teenage daughters getting into social media battles while she and her husband struggled to figure out how to best support them. The couple “didn’t want to police that process,” she said. “They needed to be angry for a while.” On the other hand, if one of the girls needed a place to vent frustration or rage, “we had to provide that, and then when they were sad or disappointed or hurt, we had to have those conversations.”

Meanwhile, Ms. Monyeé juggled her own work — including starting a business and hosting a podcast — with her daughters’ issues with remote school, all while people close to her struggled with Covid-19 and loss of income. She and her husband had to constantly remind each other, she said, “to make space for ourselves.”

Ragin Johnson finds she’s more terrified than ever for her 17-year-old son, a tall young Black man who has autism. “He’s a very friendly kid,” said Ms. Johnson, 43, a fifth-grade teacher in Columbia, S.C., “and I don’t want anybody to get the wrong impression, thinking he’s aggressive when he’s just very playful.”

She worries constantly about what might happen when her son heads out into the world alone. Between his impaired understanding of social interactions and his limited grasp of racial politics, “he doesn’t really understand what’s going on,” Ms. Johnson said. “I try to make sure he doesn’t go anywhere without me, but I can’t keep doing that.”

As she and other parents have learned in the pandemic, there may not be perfect solutions to all the challenges that have come up. Even a question as simple as “when will this be over?” can feel unanswerable. But experts say there are ways to make this stressful time more manageable.

If every conversation ends in a fight — or if your sullen teen won’t even start a conversation with you — try a different tactic. Offer to go on a drive with your child, but under specific conditions. “Let them be the D.J.,” Ms. Kolari said. “And you, you zip it. Do not use this moment to lecture them. Let your kids talk.”

If they do open up, then or later, try not to fix their problems. “You listen, and listen hard,” Dr. Koplewicz said. “You validate what they’re saying. Then, when they’re ready, you say, ‘OK, what’s next?’”

If your child seems unusually blue or emotionally fragile, don’t be afraid to reach out for help. Dr. Koplewicz was not a fan of teletherapy pre-pandemic, but the successes he’s seen with it over the last year have made him a convert, he said. Ms. Lee found an online therapist at BetterHelp.com, who helped her and Bo navigate this rocky time. “This past year,” she said, “therapy has kept me from going off the deep end.”

But therapy is not the only kind of support. Ms. Johnson leaned on a tight-knit group of girlfriends. “As a society, we are trained to worry and try to control things,” said Patrick Possel, director of Cardinal Success Program, which provides free mental health services for uninsured and underinsured people in Louisville, Ky. Many of the program’s clients are dealing with multiple crises, from job and housing insecurity to abuse and their own mental health struggles. When a teenager in the house starts to struggle, parents may say they are out of resources to tackle this problem as well. But Mr. Possel and his colleagues urge them to look around. They ask clients, “Is there a network, a friend, a professional, who can help you?” he said.

Take care of yourself.

Liz Lindholm supervises the remote schooling of her 12-year-old twin girls and 18-year-old son at their home in Federal Way, Wash., a suburb of Seattle, while working in health care administration.

What’s been most challenging this year “is the work-life balance,” she said, “where work doesn’t end and school doesn’t really end and everything just kind of blends together.”

A 41-year-old single mother, Ms. Lindholm doesn’t have much time for self-care or even treats, but occasionally, she steals a moment to pour herself a soda — ideally, a Coke. It’s a small balm, given the sizable strain on her life. But for now, it’s the best she can manage. In this, experts say, she’s not alone.

Ms. Monyeé depended on her “morning ritual” this past year. For at least 30 minutes — or as long as three 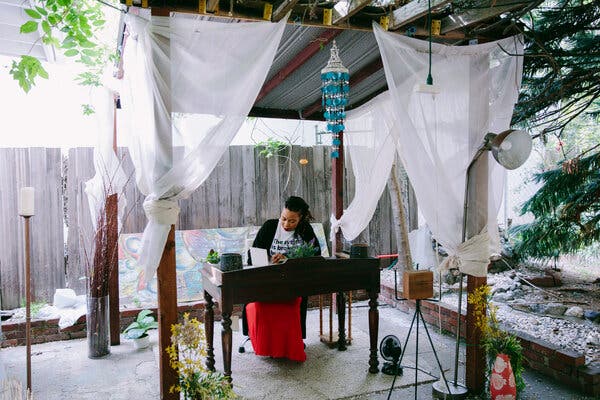 hours, if she can — she meditates, writes in her journal, practices yoga, even dances. “We’re not just mothers,” she said. “We are people who have dreams, who have needs, who have desires. Giving myself permission to be a full person has been essential.”

When parents fall apart, Dr. Koplewicz said, everyone suffers. “Self care is child care,” he said. “Are you managing to sleep seven or eight hours a night? Are you doing something spiritual?”

Many of the parents who come to Cardinal Success lack both time and private space. But that doesn’t mean they lack all resources, Mr. Possel said. “We ask them, ‘What are you doing? What does not work? Where do you have the energy to try something new?’”

Trying something new — returning to school in January — turned out to be the key for Ms. Lee and her son.

To Ms. Lee’s happy surprise, Bo is one of very few students wearing a mask when she picks him up from school. One day, on the way home in the car, he told her he was startled to discover his friends didn’t understand how vaccines work. She’s since noticed a shift in his friend group, and she says that the tension at home has noticeably lessened.

“I think our relationship is stronger now, especially since I’ve had to trust him to go off and make his own decisions,” she said. “I’m not the evil mom he thought I was. And I’m gaining new respect for him.”